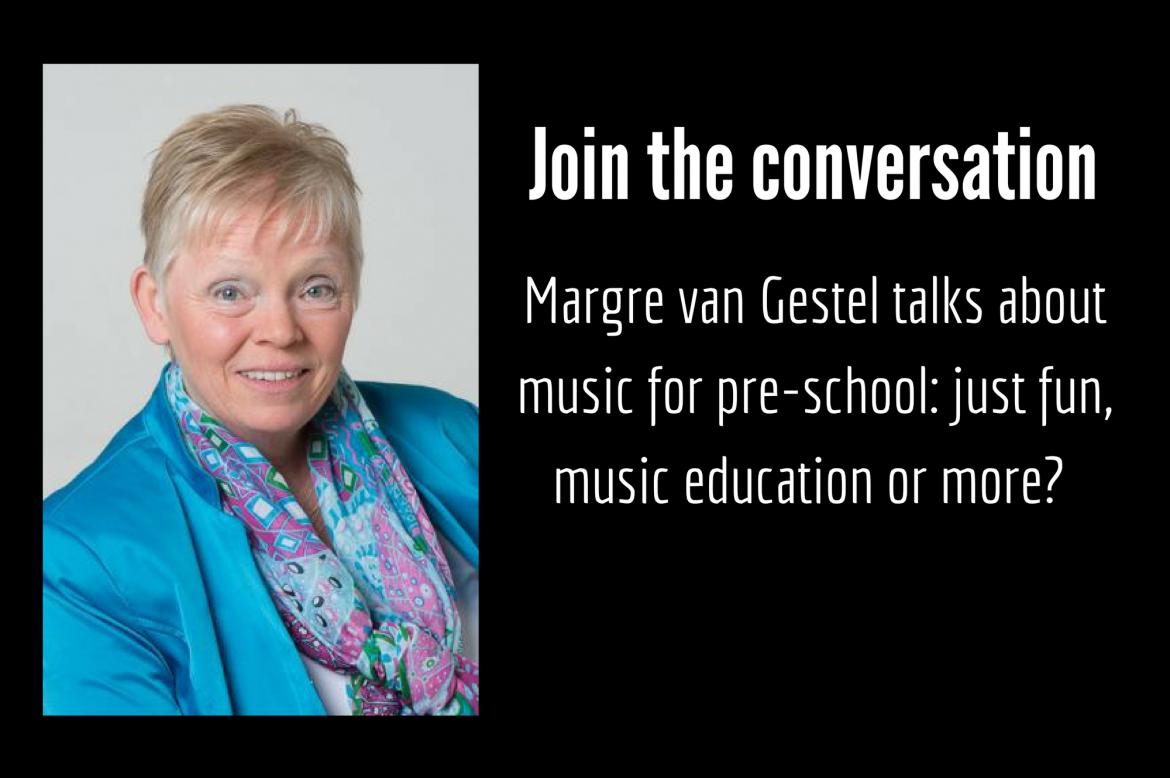 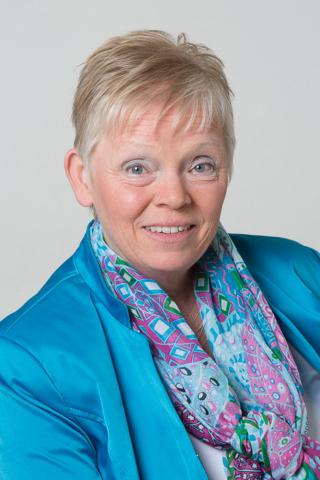 Your eyes are very sleepy, the sun has sunken low

The moon is shining brightly, stars are ready to glow

Time to go to sleep now, mummy dims the light

May your dreams be lovely, sleep my darling good night.

All over the world parents sing songs for and with their children. Centuries ago all mothers sang lullabies and it was very common for children to be involved in the music of their culture. But society has changed and, perhaps due to technology, raising children and making music in families and in the culture is changing rapidly.

When we search for ‘big names’ and methods for teaching music to young children we find f.i. Dalcroze, Kindermusic, Kodaly, Feierabend, Gordon, Montessori, Music Together, Musikgarden, ‘Music on the lap’, Suzuki, Orff etc.  The instructional goals, the teacher skills and the ages of the children (0- 12 years) they were working with were/are very different. The amount of training necessary to become an accredited music teacher varied form a one day course, distance learning on internet, to a training that included more than 500 hours of study, 200 contact hours and 50 hours working with children/parent music groups. (Flohr, 2005)

Music classes for babies, toddlers and infants are quite common nowadays, especially in the western world.  We see video’s and pictures on websites and the internet and it looks like all the children are have fun during music classes. And I really think music with young children can be wonderful and a lot of fun. But there is more…….

The importance of music in communication

Immediately after birth babies are able to communicate and they can ‘sing back’ sounds exactly, of course only when the sounds are offered at a pitch that is suitable for them. Babies make all kinds of sounds and use mimicry and their whole body to make contact. When parents are able to tune in to the baby and the baby can adjust well enough to his/her parents, threads of bonding are woven. In communicating, the baby is a competent partner and also able to take the initiative to communicate and make contact.

Stern speaks about the 'vitality effect': a voice that reflects intonation and mood. A baby who is not (yet) able to speak understands the essence of the language spoken to him, and gets even more information from the musical elements in the language. When parents talk to their baby, a dialogue arises. Parents also speak to their baby in a higher tone, make shorter sentences and their facial expression speaks volumes. They immediately use quite some musical means such as pitch, rhythm, falling or rising melody patterns, keys, sound play, contradictions and pauses to start communication.

From the beginning, parents and children share a sort of 'simple' alphabet or code in the form of musical elements that share the so-called 'infant directed speech' as ​​well as the sounds babies can produce. The musical communication between the parents and the baby is often supported by tactile, sensory and movement stimulation.

In every culture mothers sing for their children and often the baby is also carried, cradled and touched. We know that these are all effective regulators of stress. A singing mum causes a faster decrease of the stress level of the baby than when she speaks to the baby (Trehub). Babies listen to singing for longer and become calm of lullabies. When they are also rhythmically set in motion, toddlers calm down more quickly. Slightly older children respond better to 'horse-riding songs' than to lullabies. Another aspect that helps calm down is the predictability of a song and the accompanying game. Certainly with a little help from professionals, singing and musical play can provide upbringing support.

Children, and parents are fine imitators. The discovery of the mirror neurons has given us insight into the mechanisms of mutual coordination (synchronisation) and in the reciprocal takeover of feelings which takes place through imitation of facial expressions and voice volumes. Mirror neurons are activated when an action is detected. Babies imitate facial expressions and sounds, toddlers imitate movements, behaviour, pretend to play and their mirror neurons become even more active when 'the intention is to supplement the action of the other in a different way' (Scherder). For example, children of 1.5 years old are already active in singing the last word of a song.

In a session with young parents, the young parents mirror the language, body posture and, among other things, the way of picking up and carrying the baby as shown by the (music) teacher or (music) therapist.

Music provokes mirroring and synchronisation. A shared pulse/rhythm is part of the early communication of parent and child. By synchronising sounds and movement in a shared rhythm, the process of understanding the self and the other starts. Music with a strong and constant rhythmic pattern ensures a continuous cyclic movement (and is also capable of matching the heart rate of people within a group). When dancing and marching, we see very clearly that the music creates a synchronised movement with a person or with 2 or more people. Auditory stimuli and synchronisation via motor skills with rhythm and language are closely linked. We know from children with a speech-language problem that the perception and production of rhythm and the timing is disrupted (Scherder).

On the shop floor of music education with children 0-4 and parents, mirror neurons, entrainment/synchronisation via music can be used in many musical and movement activities. They also form the basis of play activities to bring child and parent into contact with each other, for example when playing peek-a-boo with scarves or when using a mirror (looking at something together, joint attention). Another form of mirror play in parent-toddler or parent-toddler arises when parents are instructed to imitate the movements of their child (for instance when moving with scarves). When parents succeed, and they can suppress their own desire to initiate movement, they give their child a sense of 'I can be there' and 'I can do something'. Then the child gets the opportunity to take initiative in the relationship so that the interaction is initiated (again) from the child.

Music education lessons are most of the time group meetings. In my group meetings and certainly at the end of the session during the 'coffee quarter' there is a role for the other parent-child couples. During the meetings they mirror each other and during the coffee quarter they talk about personal educational inconsistencies, share experiences and propose / invent creative solutions for their own upbringing. Many conversations during coffee time are about control and setting limits. Especially the parents of the 1.5-year-old sometimes complain about all the difficulties in the first year with their baby, how they struggled learning to become a (good enough) mother. They now think they really would have loved joining classes where both music and songs and tips on upbringing of young children were exchanged. In these groups they feel 'among equals' and this results in recognition and feeling connected with the group, reinforcing the sense of competent parenting and parental sensitivity. A safe place is created for both child and parent. For the teacher, the coffee moments are also a time when children are observed in their free play, where parent and child can play together with the materials used during the lesson and parents can tell their story. During the ‘coffee talk’ there is a listening ear and during the conversation there is also the possibility to make parents 'curious' about the inner world, the thoughts and feelings of their child, so that the parent-child relationship can grow and deepen.

Young mothers and fathers usually have little experience with babies in 2018. They have to get to know and 'adopt' their unique baby anyway. By familiarising them with what they can see and what the behavior of the baby could mean, for example by using special written songs where you give parents tools in observing the baby, to respond as well as possible to the behavior of the baby. That means: mentalise the inner world of the baby and interpret the behavior and the emotions/ thoughts/ feelings of the baby. From the Infant Mental Health practice we know that talking to your child about what happens, what will happen or what mommy and / or child feels or experiences, is very important in the attachment process.

Mentalisation is a psychological process that describes the ability to see your and others behaviour as arising from needs, wishes, feelings, beliefs, desires, etc. (Handbook IMH). It consists of thinking about thoughts and feelings, such as abstractions and mentalising, as well as memory processes, such as remembering. Mentalisation is important in the parent child relationship because it is a thinking about the fact that others have different thoughts, feelings and points of departure than yourself. Mentalisation is also of the utmost importance in the development of the sense of self of the child. Involvement and attachment are basic to be able to develop a sense of self. Involvement, which feeds the basic feeling of safety, self-confidence and individuality. Adherence, which develops, among other things, by being touched, by sharing with others your feelings, learning to accept / regulate bad feelings and making / learning to make choices. Because parents are physically and emotionally present, the child learns about himself and the world. If his parents are (emotionally) absent (for example by being frequently using their mobile phone or i-pad/ laptop/ computer), then the contingent mirroring of the young child's experience by the parent is lacking and the child receives too little information about the developing self, about important others and about the rest of the world.

One example of a song specially written to guide young parents in observing, mentalising and interpret the behavior of the baby:

Do you want to play?

Your smile is now vanished, your head turned away. It’s now time for resting is that what you say? Close your bright eyes now and sandman will come. Sleep little baby, playing is done.

Mother and child on drum.jpg 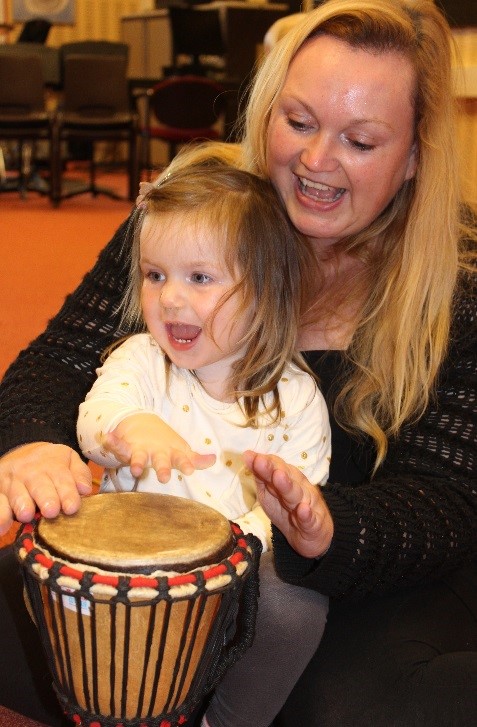 Providing parents with musical tools and musical game activities supports developing parenting. The process of growing to competent and flexible parenting can be accompanied in a musical and playful way.

Interventions, appearing as a natural product during music education, trigger changes in the parent-child relationship. The rapid development of the young child also regularly demands a change within the parent role. Short courses (6 to 8 lessons) in which parents can return to a later date when the child has a different age, giving the opportunity to change the parent role, for example in accompanying a child of 14 months. The role of the parents has to be adjusted to the demands of the upbringing of a toddler instead of a baby.

Music and singing always provide interaction and can thus contribute substantially to the parent-child relationship, good enough parenting and mental health. Because working in groups, with parent and child, playfully, according to the possibilities, interests and age of the child and taking into account the parent-child relationship, forms and nourishes competent parenting.

Allan Schore spoke about mental health as follows: "the ability to regulate emotions and behaviour in a flexible way, both alone and in interaction with others, in accordance with the demands of both the external and inner reality".

Mental health is the outcome of a process that develops from before birth and in which the environment is a determining factor. According to my opinion music, singing and playing together are essential for emotional health and music education can add much.

That is why music (education) is so important. For nothing penetrates so deeply into the inner part of the soul as rhythm and melody (Plato)

Song ‘Do you want to play?’ release date march 2018  www.zingendoemaarmee.nl